iPad Pro with an external display

One of the questions that have occupied me recently is whether an iPad Pro can replace my Mac laptop.1 One of the ways I justified spending a lot of money on one of the new 2018 iPad Pros was that it would help me avoid replacing my even more expensive MacBook Pro. I’ve already concluded that the iPad Pro is a workable replacement for my MacBook Pro as my travel machine. I’ve taken several long work trips with just the iPad and gotten by just fine.

The other role that the MacBook has long served is as my workplace Mac. For many years I’ve had one of my personally owned Macs on my desk next to my employer-issued PC.2 There’s some specialized software I use for work that’s Windows only, but for lots of general tasks like writing, outlining, and task management I prefer Mac/iPad apps.

Federico Viticci’s article on the many setups of his 2018 iPad Pro got me wondering whether the iPad Pro could replace my MacBook Pro on my desk at work. A lot of “can an iPad replace my Mac?” questions really boil down to “what software do you use?” In this case, software is not the problem. My work Mac is primarily used for writing text files (currently using iA Writer), managing tasks using OmniFocus, and browsing the web in Safari. I’ll also manage email in Spark or Apple Mail and occasionally outline things in OmniOutliner. All of these have iOS equivalents.3 Basically, anything I can’t do on the iPad is stuff I’d be doing on the PC anyway.

So for me, the question of whether the iPad Pro could replace my work Mac was not one of software, but ergonomics. I find it very uncomfortable to spend an extended period working on an iPad in the Apple Smart Keyboard or any 3rd party stand that puts the iPad in a similar position. I always end up with a crick in my neck. Laptops are just as bad, which is why I always used my MacBook Pro with an external display whenever I was at my desk. Federico’s article got me wondering if I could do the same with my iPad Pro. 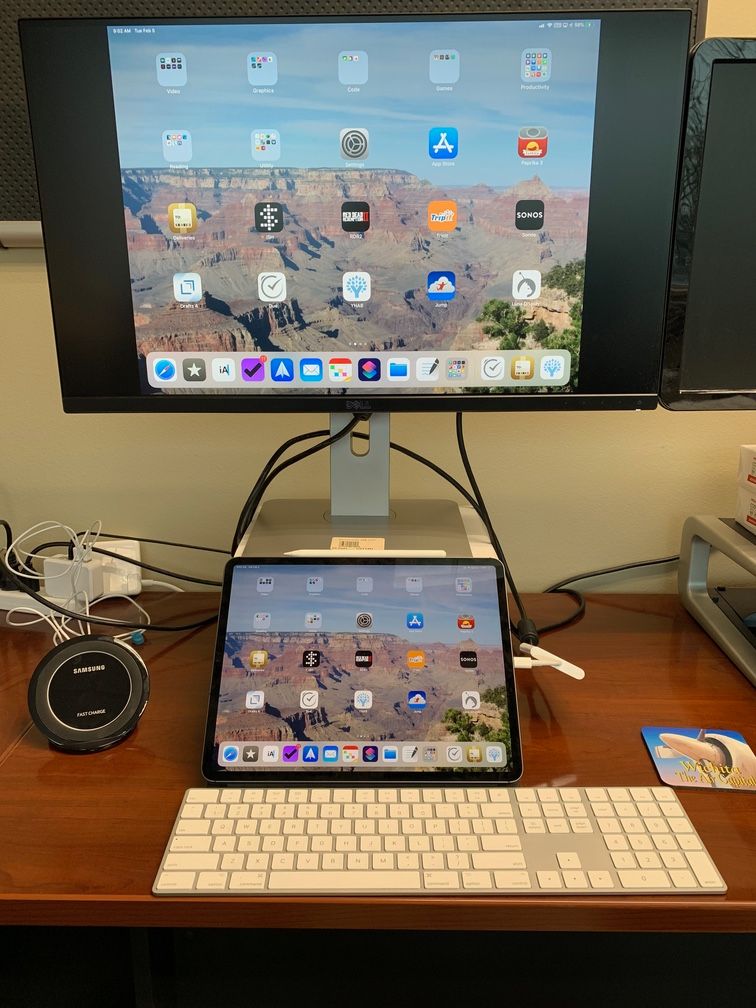 My first obstacle was finding a suitable external display to test this with. I started with an old 19″ Dell monitor that had been hooked up to my work PC. Not only was it easily available, but the 4:3 aspect ratio meant that unlike a widescreen monitor the iPad output wouldn’t be pillarboxed.4 Unfortunately, the iPad looked terrible on it. Not just “this obviously isn’t retina,” but blurry enough that I’d get a headache if I used it for any significant length of time. A 24″ HD monitor suffered the same issues. The iPad looked great on one of the 24″ 4K monitors I had hooked up to my iMac at home, but I didn’t want to bring one of them in to work. Eventually, I tried it on a Dell 27″ U2719D that’s usually attached to the work PC. It’s not 4K, but it’s 2560x1440, which is somewhere between a standard definition monitor and retina. On it, the iPad’s output was clear and sharp. As is my usual practice, I used several reams of paper to get the monitor up to a higher elevation.

I connected the iPad using the Apple HDMI adapter that I bought to use for presentations. It has pass-through charging, so my iPad gets charged as well as connecting it to the monitor.

To hold the iPad, I used an Elevation Lab DraftTable stand. This stand is big, heavy, and rock solid. I’m running it in the highest position, which holds the iPad at about a 45° angle. I started off with it off to the left of my keyboard (I’m left handed), but I quickly found that centered underneath the monitor worked much better for me.

Speaking of the keyboard, I used the same Bluetooth Apple Magic Keyboard with the numeric keypad that I’d been using with my Mac at work. It works fine, but if I decide to go with a setup like this over the long term, I’ll probably switch to something different. For one thing, I’m a mechanical keyboard guy. I like clicky switches and lots of travel. For another, I think Bluetooth is actually a disadvantage in this role. The problem with a Bluetooth keyboard is that if I disconnect the monitor and want to use the iPad in tablet mode, it retains the connection to the keyboard so the on-screen keyboard won’t come up when I need to type. Several times I’ve had to turn off Bluetooth in order to type on the iPad. It would be better to have a wired keyboard plugged into the same hub as the monitor. That way disconnecting the monitor would disconnect the keyboard as well.

Using the iPad with an external monitor is a bit of an odd experience. It’s not the same as using a laptop with an external display because the iPad’s touch interface still requires direct manipulation. This means dividing my attention between the monitor and the iPad. When I’m reading or typing, I can look at the external monitor, but if I need to tap or swipe I have to glance down to make sure I hit the right touch targets. Glancing down is not really a problem, but I do find that I sometimes forget to look back up and end up just using the iPad screen rather than the external display. While I can still use the iPad that way, it kind of negates the ergonomic benefits of using an external monitor.

Contrast this to using macOS on a laptop. Because the trackpad manipulates the screen indirectly, there’s not the same requirement to look at the laptop screen rather than the external monitor. Trying this configuration does have me hoping that Apple will add some sort of pointing device support to iOS, though I don’t know how likely that is in the short term.

FaceID works fine in this configuration. In fact, if anything it reinforces how much better having FaceID makes iOS. Rather than having to type my master password into 1Password, all I have to do is glance down at the iPad and my password will get filled in. I really can’t wait until FaceID comes to the Mac.

When I started this experiment to make sure I gave the iPad with the external display a fair shake I vowed that I would do everything I possibly could on the iPad and use my Mac at work as little as possible. Since the beginning of January, the only thing I’ve used my Mac to do at work is to make some changes to a Gantt chart I made in Typora.5 Other than that, the only reason I’ve booted up my MacBook Pro has been to do maintenance tasks on it (to run backups and software updates).

That said, the fact that this sits right next to my work-issued PC does provide a bit of a safety valve. I may have done a bit more on Windows in the past month than I would have if I’d been using the Mac rather than the iPad (particularly when I need to tweak a Word document or PowerPoint).

Overall, I think this has been a successful experiment. I clearly can get by with the iPad Pro and PC at work. That said I don’t know if I’m entirely sold on the iPad plus an external display. Dividing my attention between the iPad and the monitor is kind of awkward, and I’ll often find my attention captured by the iPad and forget to look back up at the display, negating the benefits of having the external monitor. It tends to work best for reading and typing, less well for anything requiring more sophisticated touch manipulation.

That kind of leaves me in limbo. If I were to commit to this configuration, I’d want to buy another external monitor for the purpose so I could move the 27″ back to my work PC.6 I don’t know if I’m quite ready to go that route though. For the moment I’m trying a tall iPad stand so I can see if elevating the iPad itself on a stand is a better ergonomic solution for me than an external monitor.

Mac mini Home Server I recently replaced my Drobo NAS with a Mac mini. The initial impetus for this came from the fact that my Drobo was running low on space. All of the

Mac Power Users Live in Chicago I’ve been a longtime listener of the Mac Power Users podcast. I started listening about nine years ago and haven’t missed an episode since.