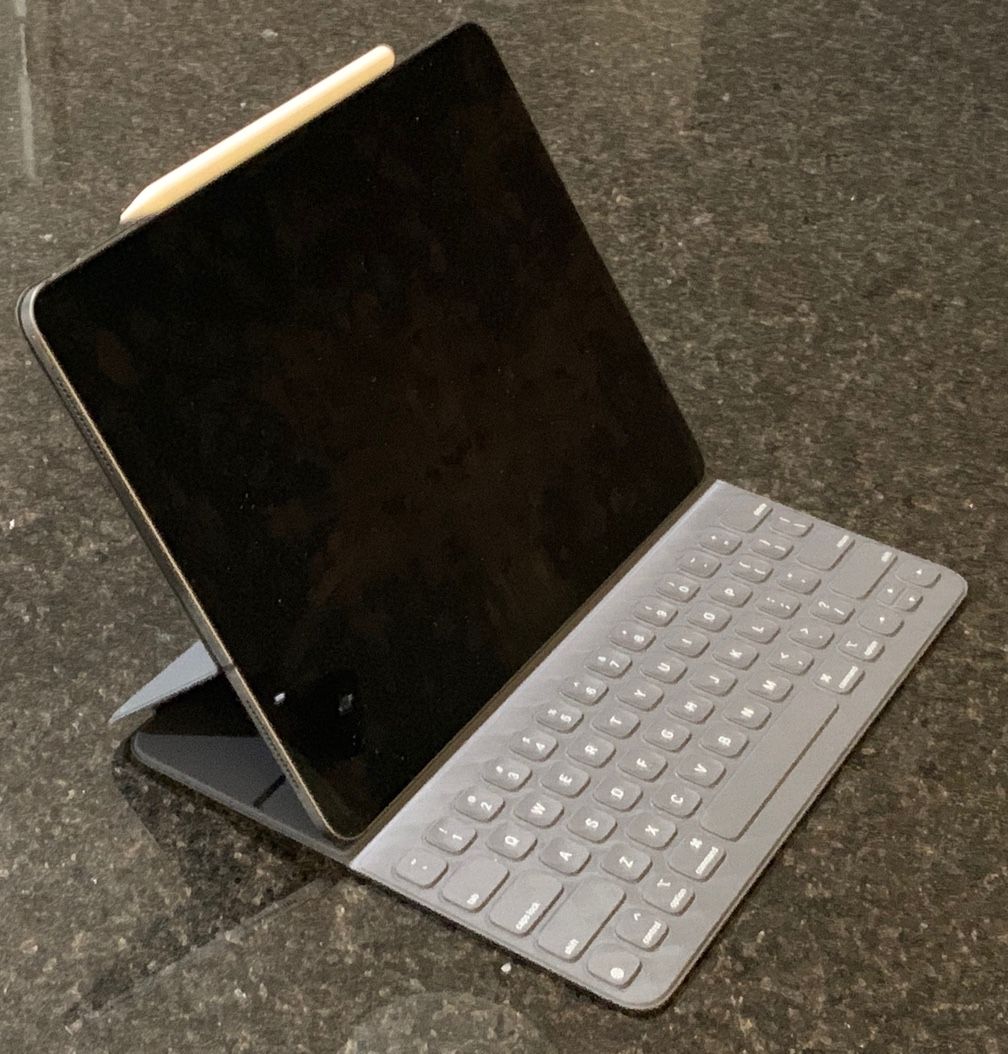 When I got my 1st generation 12.9” iPad Pro back in 2016, my overwhelming impression was of how large it was. Compared to the iPad Air 2 that I had previously, it seemed huge. With the new 12.9” iPad Pro, my first impression is how small it is. Some of this is coming from the old 12.9”, of course. I don’t know how someone coming from a 9.7 or 10.5” would feel. Compared to the old 12.9”, the new one is about an inch narrower (in landscape) and a quarter of an inch shorter. It feels quite a bit lighter as well; both because it is about an ounce lighter and because the smaller size means the center of gravity is closer to your hand when holding it in landscape. I was already fairly comfortable using my old iPad Pro handheld, but it’s noticeably easier with the new one.

I really like the design. The slim bezels seem like the natural design for the iPad. The squared off edges look nice and don’t create any issues when I’m holding it.

FaceID rocks! I know some people have had issues with it on the iPhone, but in my month using it on the iPhone XS, it’s worked very well for me. So far, the iPad has been similar. I’m still getting used to making sure I don’t cover the camera with my thumb, however. That will be a matter of training myself on where to hold it (yes, “You’re holding it wrong” is still a thing). It may just be setting up a new device and having to log in to a bunch of stuff, but I’m finding Face ID to get into 1Password almost as useful as Face ID to unlock the iPad.

I really like tap to wake too. If anything tapping the screen to wake up the device seems more natural on this than it does on the iPhone. Being able to double tap the smart keyboard to open great, though I’m not at the point where that’s second nature yet. As an aside, I’ve heard this describes as “double tap the spacebar”, but for me, it works with any two taps in succession (even two different keys). The first keypress wakes the iPad, allowing FaceID to do its thing. The second slides the lock screen out of the way.

Speaking of the keyboard, think the Smart Keyboard Folio is an improvement on the old Smart Keyboard. It’s considerably more stable than the older version. While most of my brief use so far has been on a desk or countertop, it does seem more “lappable” as well. I’m not finding the more vertical ”desk” angle very useful, however. Some of that may be due to my height (6’5”). If I were 6” shorter the more vertical position might be better for me (I know @macsparky complained some about the angle of the old Smart Keyboard, but I never found it to be a problem). As it stands, I think it’s going to live at the less steep “lap” angle (which is almost exactly the same as the old Smart Keyboard).

The typing experience is almost identical to the old one. If you liked the old model, you’ll like this one. If you didn’t like the old one, I doubt you’ll find this one any better. Personally, I liked the typing feel of the Smart Keyboard. While it’s not as good as a nice mechanical keyboard, I do think it’s the best keyboard Apple currently makes.

One minor affordance that I just read about today is that when you have the keyboard folded around to the back of the folio (“tablet mode” basically) it has some magnets to keep the keyboard part of the folio in place, rather than flopping around the way the old one did. I’ll still probably take it out of the folio most of the times that I’m not actively using the keyboard, but leaving the folio attached in tablet mode does seem like it will be less annoying than with the old one.

I haven’t really spent enough time with the Pencil to say much about it. The pairing and charging seem to work well. I tried the double tap gesture to get the eraser in Apple Notes and it is a lot easier than switching tools.

The last “accessory” is the new 18-watt power brick. It seems surprisingly big. Since the prongs don’t fold it’s actually a bit longer than Apple’s 29-watt MacBook Adorable power brick (smaller in the other dimensions though). Honestly, I don’t think I’ll be using this much. I’ve got a bunch of MOS bricks which have 2 USB-A ports in addition to USB-C, as well as one of the MacBook bricks. All have folding prongs, which are nicer in a bag and while the 18-watt brick is smaller, it’s not that much smaller. I know a lot of people were eager to get a more powerful iPad power brick from Apple, but I’m not that impressed.

Power brick aside, I’m very pleased with the hardware. On the other hand, the software experience was a bit rougher. I restored mine from an iTunes backup and it stalled right at the end of the initial sync process. I did a restart and it seems like all of my content got synced over.

Once I got past that obstacle, every single app stalled with the progress circle about 2/3 of the way around. Restarting did not fix this, so I ended up deleting apps and redownloading just the ones I really needed. Doing this has the potential to delete local data, but I was pretty confident that everything important was in the cloud, plus I’ve still got my iTunes backup (and until I send it in to the Apple Give Back program I could always pull data off of my old iPad too).

Partway through this process, the logjam broke and the rest of my apps started downloading. I figure there must have been a few apps that were gumming up the works and once I deleted those the rest were able to download. Since I was getting rid of so many apps that I hadn’t used in years (if ever) I went ahead and completed the process of winnowing out old apps, so some good did come of this frustrating experience.

My only other issue so far was not with the device, but with my AppleCare+ coverage. When I got the Proof of Coverage email from Apple it appeared to list two iPads, rather than one. One of the serial numbers matched my new device, but the other did not. It also said both were 1tb models when I had the 512gb version.

I wanted to make sure there wouldn’t be any issue with my AppleCare coverage if I have to use it, so I gave Apple a call. The first rep I called looked into it (using screen sharing to take a look at the email I received and the serial number of my iPad) and passed me on to a person from the AppleCare team. She did some research and was able to explain that the second “iPad” listed was actually my Apple Pencil. She couldn’t say why it listed my iPad as the 1tb model, but she assured me that it wouldn’t affect my coverage. The Proof of Coverage email is rather confusingly drafted, but the Apple support reps I talked to were very helpful.

Omni Focus Field Guide, Third Edition Review I have long been a fan of David Sparks’ MacSparky Field Guides. These originally started out as a series of Apple iBooks that used the unique

Three months with the iPhone XS Now that I’ve had my new iPhone XS for a few of months I feel like I’ve used it enough to have an informed opinion on it. Rather than burying the